Just found out the sad news that Christopher David Walsh lead singer of the great US Gothic Rock band Judith and Bass Player with the excellent US Gothic Rock band Requiem In White sadly decided to end his life at the weekend in Boston. I had the pleasure of seeing Judith make their UK debut at Sacrosanct in London in the 90’s where I met Christopher David for the first time and were one of the bands of the festival. Then I saw them again and met Christopher at the Whitby Goth weekend also in the 90’s. Judith for me where one of the top Goth Rock bands of the 90’s that kept the Goth scene alive especially when UK was in the depth of goth music decline.
Judith released 3 epic albums Fohn, La Reveuse & Play Of Light as well as two great EP’s Sahara Seas & Pills which still find a place in my sets.
The last time I saw Judith and met Christopher was in New Orleans at Gothcon in 2002. I had been invited to DJ there as a guest at the aftershow party. Christopher surprised me by dedicating the last song of Judith’s set *Future* to his friend from the UK DJ De’Ath. A warm, generous and talented musician who will be sadly missed. 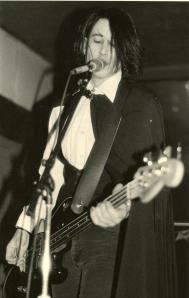 “The flames keep growing higher, about to consume us all”.

This site uses Akismet to reduce spam. Learn how your comment data is processed.